The Voice of Al Jazeera

Writing about events for Al Jazeera that are shaping the political landscape like the Yemen War and ISIS  is a dream job, despite its complexities, says Briony Sowden, Al Jazeera producer/journalist.

A chance meeting with an Al Jazeera journalist gave the AUT journalism graduate the opportunity to fulfil her dream to work as a journalist in foreign affairs overseas.Briony moved to Doha on a three month freelance contract – 4 years later she is still there, working for Al Jazeera as a full time producer/journalist.

“I get to work on some of the most complex stories in the world that are shaping the political landscape, like the Arab Spring, the Egypt revolution, the Yemen War and ISIS."

Briony says the job can be hectic, fast paced and exhausting.

"We are the writers in the newsroom, so we write everything that goes to air – the packages, the scripts, the presenter cues, the openers. We deal with all the pictures and make sure the visual elements are perfect, as well as the facts. As a producer, I deal with everything. The buck stops with me so if a mistake goes to air, I’m responsible.”

Al Jazeera English is a 24 hour international news and current 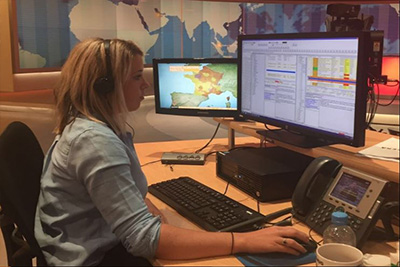 “We have to be constantly fact-checking and researching stories. Our deadlines are very tight and we are expected to have a good understanding of most major news stories so we can turn around copy quickly and get a story to air.”

Briony loves every minute of it, revelling in the fact that the stories she is involved in have the power to change people’s lives.

"It’s about giving people the platform to be able to tell the world their story, and help educate others," she explains, adding it may be a small story about an ambulance service in a remote part of the world, or about the impact of climate change in the developing world. Local or international, the message is often still the same.

We often say that Al Jazeera stays when the world leaves. Keeping reporters on the ground to cover a story the world has lost interest in is vital in keeping the story alive."

It can be an emotionally difficult job. As a member of an international newsroom, Briony is dealing with complex stories that can involve one or multiple deaths. You have to learn to desensitise, she says, but it can be a struggle.

“You cannot escape the misery in the world. The refugee crisis is particularly hard; the pictures of people drowning as they attempt the perilous voyage to Europe, or the people starving in besieged towns in Syria. Television is a powerful medium and I have to watch raw, unedited footage which has come straight from the field."

"I will never forget having to watch pictures of victims of a chemical weapons attack in Syria; most of them were just young children. We give voice to the voiceless."

The challenge is being sensitive and respectful to the deceased and their families, while making sure the story is being told, she explains.