Tips on Networking from Alumni and Students

“I wasn't confident at all at networking. I was anti-social and networking needed me to be the opposite. But once I understood the value of networking, it empowered me to give it a go,” says Graceland Ioane, ASB Team Support and AUT alumni (above).

Graceland is now so comfortable with networking she is one of 11 alumni who generously gave their time mid May to help students practise networking.

a range of industries. It was a pretty difficult task initially for AUT student Mehreen Manzoor (right below). Although she had practised her elevator pitch in her head many times, she found it a challenge to say it out loud to a stranger.

“I felt so nervous when I approached the first person but after talking to five different alumni, it did become a lot easier.”

Student Arindam Das signed up for the event to get tips on his networking style, confessing he thought his approach was pretty good.

“But I found I’m imperfect,” he says, after receiving feedback about his lack of eye contact and stiff posture.
“I come from a military background and realised I was being very stiff and over formal in my approach,” he says.

TradeWindow customer success manager - and AUT alumni - Trishul Raj  says networking is about meeting and having a two way communication with the other person.
"Some students had not gathered their thoughts before they spoke. It is really important to think about what you want to say first.” 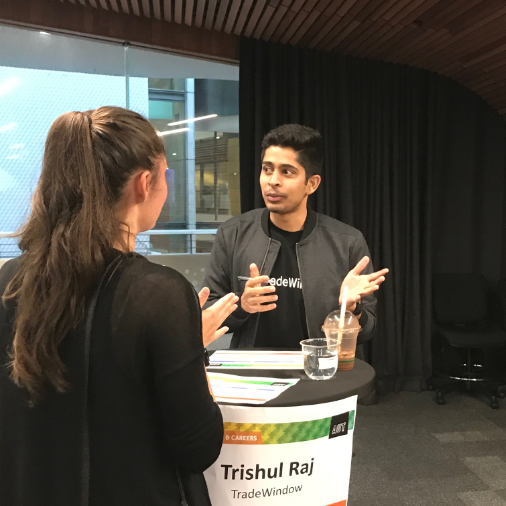 For example, says Trishul, if you have a really good project you’ve been working on, think about how to describe it in 30 seconds before you approach someone.
“You need to make an impact.”

He also advises students to figure out their transferable skills and what they have to offer.
“Networking is not about getting a job but having an opportunity for someone to get to know you a little.”

This was Trushul’s second year of coming to help students network. He realised, while doing the Edge Award, how satisfying it was to volunteer and give back.
“I also felt it was useful to give current students a chance to talk to people from business backgrounds.”

Tupu Tai intern Shaye Va says many students were saying things to her that they thought she’d want to hear.
“Don’t do that. You have to be unique to you. One person didn’t mention where she was from until I asked – that is something that made her unique.”

Shaye also advised students to keep an open mind about career possibilities and not let their degree define them. “You are human, you’re more than your qualification.”

Hilary Esterhuizen, accounting and compliance manager for SBA, was another alumni helping for a second time with the student networking event. She recalls how nervous she was about networking as a student and believes it is a great way to get practice with strangers you have a connection with through AUT.

“Make sure you don’t talk too fast or too soft. I know you do that because you are nervous, but it is important to slow down. Also look at me when you’re talking to me,” she advises. 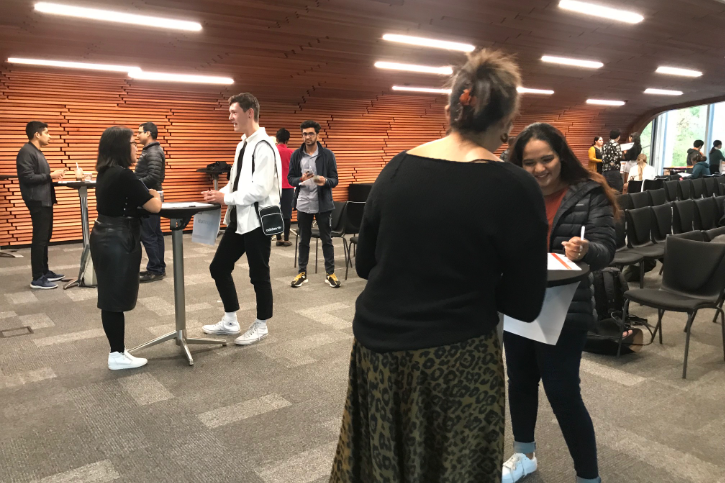 Mitchell McDonald, intermediate software engineer at Orion Health, also found students were talking too fast. He said the students that did best were those that managed to find something to connect with, such as the an interest in the industry or field he worked  “We’ve been through it ourselves and know it gets better,” he says.

Graceland encourages students to relax more.
“Smile and relax, stand tall and always give a firm handshake. Also have your elevator pitch ready so you have something to say."

Engaging students in the art of networking means they can practice putting themselves out there to get noticed, and build social skills and self-confidence, explains Serena Tiaiti, Manager of Employability who organised the event.
"By talking to our alumni students are building new connections and gathering new information about industries of interest.”

If you'd like to find out more about networking, go to elabonline, sign in with your student name and ID, and look for workshops on networking.